The Power and Lessons
of Cleveland’s History

“I love stories of the past and the task of understanding how it led to now.”

As a boy on trips “downtown,” I’d admire the tall buildings and great homes, and ask my parents who had lived in the few remaining mansions along Euclid Avenue. They gave me names like Rockefeller, Mather and Hanna and told me they’d shaped what in the early 1950s was a vibrant and impressive city. I immediately wanted to understand how these people changed the world into which I was born. In time, I became a high school history teacher. My classroom was where I told his story and her story of many lands and eras. Great tales, but the ones of home, my immediate world of Greater Cleveland, continued to have a special magic for me. 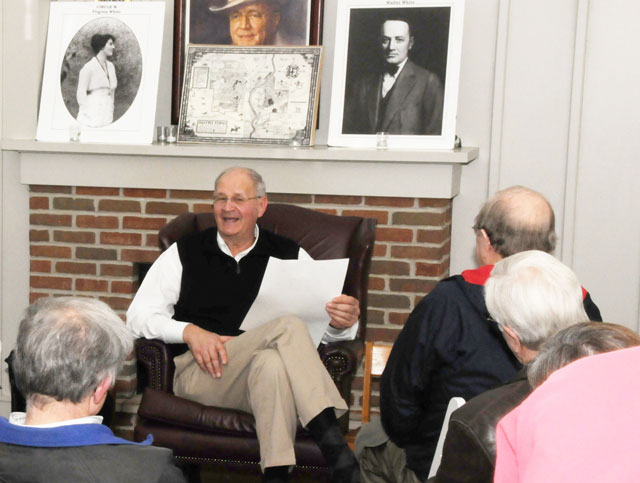 After I left the classroom to be an entrepreneur, my interest in history stayed with me. There came a time not long ago when I followed my passion to the Gates Mills Library to do research on Cleveland-area business leaders who had lived nearby. Observing me for some days, a kind lady asked questions and invited me to speak to the Gates Mills Historical Society.  I said yes. On the way, I thought to myself that I’d probably be talking to 20 or so history buffs. I mentally rehearsed the thoughts that would drive my extemporaneous remarks and I hoped to myself that I’d be able to kindle a bit of the excitement I felt about my subject.

When I got to the meeting, I had a hundred listeners and it was quickly clear they were hungry for what I was offering. It had been decades since I’d been in a classroom, but the thrill of engaging listeners came flooding back. That day several years ago gave me evidence there is an appetite for tales of Cleveland and the figures who made Greater Cleveland great in more than geographical area. After that first talk I followed the thread, spoke to leaders of organizations and before long had a full calendar of speaking engagements. Soon people were calling me The Storyteller. I liked it. I continue to like it. The role has taken on a life of its own. I’ve kept my “day job,” but I’m not sure how long that will the case. Now, with several colleagues, I’m expanding the role in the hope it will become more important and useful. I enjoy being “The Storyteller,” but  have motivations that go way beyond my satisfactions. What are those motivations?

I want to promote the community I loved as a boy and still do. I’d like to do my part to counterbalance the negative stereotypes that have become prevalent. These days we may get an argument as to whether we are the “The greatest location in the nation,” but I absolutely know we’re not “The mistake on the lake.” I’d like to illuminate what made Cleveland great in the last decade or so of the 19th and the first three decades of the 20th centuries. I’d like to play a part in facilitating a discussion of the ways in which the stories and lessons of the past suggest how we might renew our civic greatness. I’d like to celebrate the stories of the individual Clevelanders and the great families who changed this area and the world.

There is nostalgia involved when we look upon this territory. The Rockefellers, Mathers, Hannas and their peers lived lives, sometimes on Millionaire’s Row, of glamour. When we hear these stories some of the same elements are in play as when we enjoy the tales of old Hollywood. But for me and the members of my audiences, I think the motivation is more than glamour or nostalgia. Cleveland’s history is unusually, remarkably, rich in stories of creativity, imagination, determination and courage. These stories inspire my audiences and I think that if well presented these tales would light up the hearts and minds of Cleveland’s younger citizens.

Life is complex. Cleveland’s greatness was a product not just of heroic figures but of historical circumstances and forces. We can’t be sure those alignments will come again. All we can do is take from our history what is inspiring and use it to move us and our community to seek new heights of imagination, creativity, determination and courage. I intend to give that mission a serious shot and I invite you to stay with us and see if together we can  help our community find its way to a future that honors and learns from the stories and the achievements of its past.